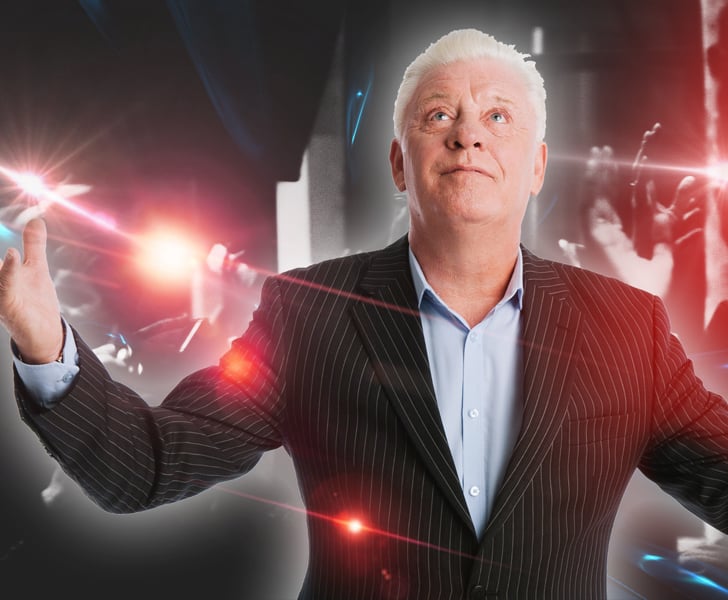 One of the World’s Most Renowned Mediums

Derek demonstrated his gifts globally for over thirty years. He was in the public eye through the medium of radio and television worldwide, since the early 1990s, and so it follows that he remains the most celebrated and renowned medium in history.  A celebrity and performer like no other, Derek was loved by millions and became one of the most engaging and entertaining personalities of his genre. With his feet firmly on the ground, Derek continued to be the chirpy Scouser that he always was, someone who identified with everybody, and made no bones about being just an 'ordinary person' who happened to have an extraordinary gift.

Derek became aware of his special gifts as a young boy at the age of six, when he encountered the spirit of his late grandfather at his grandmother’s home in Liverpool. At the time he did not realise that he was seeing a spirit person but when speaking with his grandmother, who was a medium herself, she realised that Derek was the one out of all her grandchildren who would carry on with the gift.

As a boy, Derek’s interests lay in the area of football, and he went on to have a successful career in the game; coupling with this, he was always aware that he “knew” things that others did not. Occasionally, he would pass on messages to his colleagues and fellow players, but tended to not do this very often. The world of football was not the place for a medium in those early days.

A serious leg injury saw an end to Derek’s footballing career in his late twenties, whilst playing for an Australian team. He decided to return to his home town and from thereon he dedicated his life to working with spirit. No sooner had he accepted bookings for private readings, than word got around about the fantastically accurate medium “Derek Acorah”.  He opened his first establishment in Liverpool where people could come along to book and receive a reading with Derek.

Derek commenced demonstrating mediumship to audiences in Spiritualist Churches in the 1980s, but he realised that to reach the people, he had to take his gifts TO the people. Spiritualist Churches in those days were not viewed by the majority as they are today. Spiritualism was considered by many to be something frightening with the churches, only frequented by darkly clad people summoning up spirits under a red light. Derek of course, was very well aware that this was far from the case and was determined to throw a whole new and bright light on spirit communication. His answer to the conundrum of bringing Spiritualism to the people was to commence demonstrations of mediumship in theatres and halls, firstly in his home town and then further afield in other parts of the country. In 1998 Derek was the first medium to use screens and cameras on stage at the Liverpool Empire Theatre in order that the audience could better view the subject of his delivery. Many other mediums later followed his stage format and still use it to this day.

Derek’s television career commenced in Manchester at the studios of “Granada Breeze” which was the satellite arm of Granada Television. He began as a guest on the magazine programme “Livetime” demonstrating mediumship live on air without the benefit of an edit suite. There was an enormous response to his appearance and after that first week was signed up as a regular guest, remaining with “Granada Breeze” for five years as the leading light in programmes such as “Psychic Livetime”, “The Psychic Zone” and “Predictions”.

Derek’s career saw him become the pioneer for the demonstration of his gifts, both in the media and on stage. He was the first-ever medium to broadcast his theatre shows live on the internet.  Since the inception of social media live appearances, many have followed in his footsteps but he was the first to share his gift with the world as it happened on stage.

Derek was the only medium in history to have been invited to demonstrate at the iconic Oxford Union – an honour that no other medium has repeated. His photograph is up there on the walls of the ancient building along with other photographs of the great and the good. He is the only medium ever to receive a Variety Club of Great Britain Personality of the Year Award, thus demonstrating his appeal beyond the world of Spiritualism. Derek has also been the recipient of an as yet unmatched five Soul & Spirit Magazine awards in one season.

An author with eleven books under his belt, Derek was also a contributor to “Fate & Fortune Magazine” and “Soul & Spirit Magazine”, producing a monthly column for both publications.

Derek was honoured in 2003 to be asked to become Patron of Pathfinder Dogs which is a charity training German Shepherd Dogs to become guides for blind people. He was passionate in his quest to raise funds for this unique and well-deserving charity.

Derek did not confine his gifts to public demonstrations of mediumship, but took his abilities to step into the unknown and the world of the paranormal. Following his lone ghost hunts on Granada Breeze’s “Derek Acorah’s Predictions”, it was not long before he was approached by the makers of the groundbreaking programme “Most Haunted” when, following the making of a pilot show, he became the star of the ghost investigation programme. Although it is now many years since Derek decided to walk away from that particular programme, he is still much missed and his departure is much lamented. Not a week would go by when he didn't receive messages pleading with him to make a return. Derek continued on as The Godfather of the Paranormal, conducting occasional investigations with the public. Unsurprisingly, these events were always sold out well in advance of the date.

Derek’s name, both as a medium and a paranormal investigator, is the first one that most people think of.  He accepted many commissions for both the media and corporate events. A magnificent example was when Derek spent a week in Lincolns Inn Fields on the Ericsson Scare Walk. It will be a week that many will never forget!  His name often pops up in programmes such as “Coronation Street” and “Emmerdale” when the storyline involves “ghostly goings-on”. Derek had been approached by, and has given readings to numerous celebrities and people in the public eye, but confidentiality was his by-word and he would never break a confidence or wish to gain publicity by using the name of another.

As well as paranormal programming such as “Derek Acorah’s Predictions”, “Most Haunted”, “Derek Acorah’s Ghost Towns”, “The Trail of Guy Fawkes”, “Antiques Ghost Show”, “Paranormal Egypt” and Sky 1’s “Derek Acorah”,  Derek’s charisma and charm made him a most welcome guest on numerous television programmes ranging from “Dr. Who” to “Bo Selecta”, “Loose Women”, “The Weakest Link”, “Big Brother’s Bit on the Side”, “Britains Got More Talent”,  “Through The Keyhole” and many many more. In August 2017, Derek spent almost a month in the Celebrity Big Brother House where he endeared himself to the wider audience and ended up a finalist, coming fourth in the ranking.

Derek was always a dedicated worker for Spirit, connecting people with their loved ones in the Spirit World and brought proof of survival on a daily basis. Derek was one of life’s special people whose appeal crossed the generations from young and old alike. Where Derek went, it wasn't long before other people followed, but there will only ever be one “Derek Acorah”!

SP: Allstar Psychics
If you need further information or have any questions, please contact my Customer Care Team on: 0208 712 5690.
Click To Call Now
Busy Busy - 1 Mins
More on
Reviews
,
​
Q&A

New
-
readings
More on
Reviews
,
​
Q&A
​
Back to Psychics

We love to receive feedback. Please leave a few comments about your experience.

SP: Allstar Psychics
If you need further information or have any questions, please contact my Customer Care Team on: 0208 712 5690.